Disinformation and conspiracy theories, from the European Commission

What are conspiracy theories? Why do they flourish?

The belief that certain events or situations are secretly manipulated behind the scenes by powerful forces with negative intent.


2. Conspiracy theories have these 6 things in common

2. A group of conspirators.

3. ‘Evidence’ that seems to support the conspiracy theory.

4. They falsely suggest that nothing happens by accident and that there are no coincidences; nothing is as it appears and everything is connected.

5. They divide the world into good or bad.

6. They scapegoat people and groups.

They often appear as a logical explanation of events or situations which are difficult to understand and bring a false sense of control and agency. This need for clarity is heightened in times of uncertainty like the COVID-19 pandemic.

Conspiracy theories often start as a suspicion. They ask who is benefiting from the event or situation and thus identify the conspirators. Any ‘evidence’ is then forced to fit the theory.

Once they have taken root, conspiracy theories can grow quickly. They are hard to refute because any person who tries is seen as being part of the conspiracy.

Most believe they are true. Others deliberately want to provoke, manipulate or target people for political or financial reasons. Beware: They can come from many sources e.g. internet, friends, relatives.

The first step to prevent conspiracy theories is to know that they exist. Be aware. Stop the spread.

Is this a conspiracy theory? Check before sharing


1. Check the author – who is writing this and why?

Unlikely to be a conspiracy theory

- The author has recognised qualifications and credentials in the topic

Likely to be a conspiracy theory


2. Check the source – Is it reliable and reputable?

- The source has been quoted by several reputable media outlets

- The information is backed by many scientists/academics

- The source of information is not clear

- The information is shared only by self-proclaimed experts


3. Check the tone and style – Is it balanced and fair or sensationalist and one-dimensional?

- The author does not shy away from exploring complexity, including different perspectives

- The author is prepared to acknowledge limits to their knowledge

- The tone is objective, factual

- The author presents their information as the only valid truth

- The author raises questions instead of providing answers

- The tone is subjective, emotionally charged

- Emotional images or anecdotes are used to illustrate the message


What is a real conspiracy?

Real conspiracies large and small do exist. They are more often centred on single, self-contained events or an individual like an assassination or a coup d’etat. They are unearthed by whistle-blowers and the media, using verifiable facts and evidence.

Looking for a real conspiracy? In 2006, the U.S. District Court in Washington DC (USA) ruled that major cigarette companies were guilty of conspiracy. For decades, they had hidden evidence of health risks attached to smoking to promote higher sales.

Check your sources. When in doubt, don't share. Stop the spread.

Conspiracy theories: What about my own beliefs?

Nobody is free of biases or fears, which could open the door to believing in a conspiracy theory.

Where do my fears, beliefs and values come from?


Interview yourself: Why do I believe what I believe?

- What are my fears, beliefs and values? How do they affect my decisions and how I interact with people?

- Do I have prejudices and believe in stereotypes? Why?

- Do I feel disadvantaged? In what way?

- Do I feel the need to blame somebody else? Why?

- How do I choose my sources of information?

- Has this changed since the COVID-19 outbreak?

COVID-19 is frightening. It's normal to feel overwhelmed and search for answers.

Keep in mind: Nobody is responsible for creating the virus but we all can help curb the outbreak.

Be aware of information overload. Rely on verified information. Stop the spread. 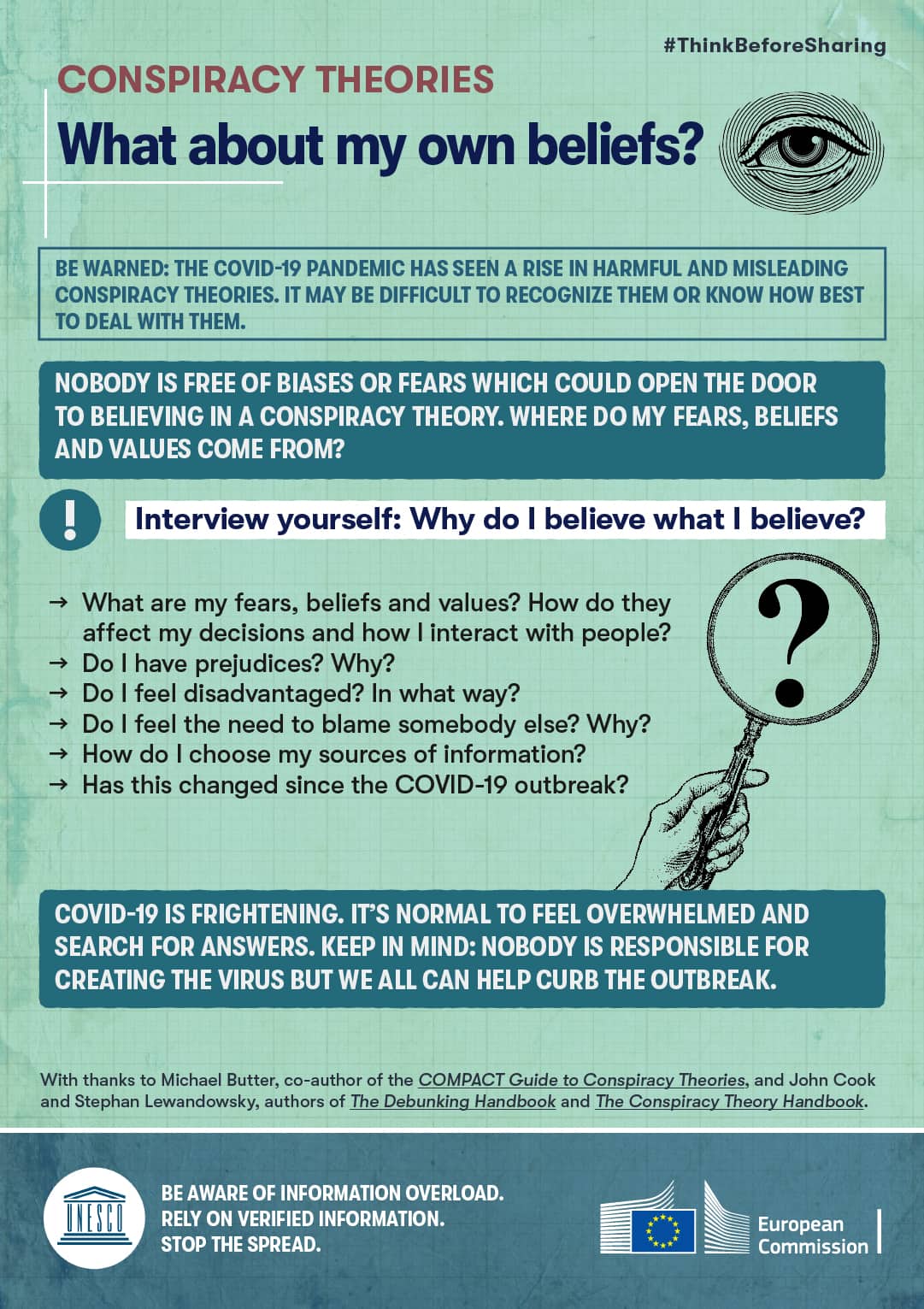 Conspiracy theories can be dangerous

Conspiracy theories often target or discriminate against an entire group perceived as the enemy behind a real or imagined threat. They polarise society and fuel violent extremism. While most people who spread conspiracy theories genuinely believe in them, others deploy them cynically to achieve these effects.

- They identify an enemy and a secret plot that threatens peoples' lives or beliefs and spark a defence mechanism, which can fuel discrimination, justify hate crimes and can be exploited by violent extremist groups.

- They spread mistrust in public institutions, which can lead to political apathy or radicalization.

- They spread mistrust in scientific and medical information, which can have serious consequences.

Watch out: Perceived "out groups" of society are especially prone to be targets of conspiracy theories, hate speech and disinformation campaigns. This includes people of different origin, religion or sexual orientation. In the context of COVID-19, specific groups were frequently falsely blamed for the spread of the virus in Europe, including people of assumed Asian origin, Jews, Muslims, Roma, and people who identify as LGBTI+.

Conspiracy theories can have serious consequences. Take them seriously. Check before sharing. Stop the spread. 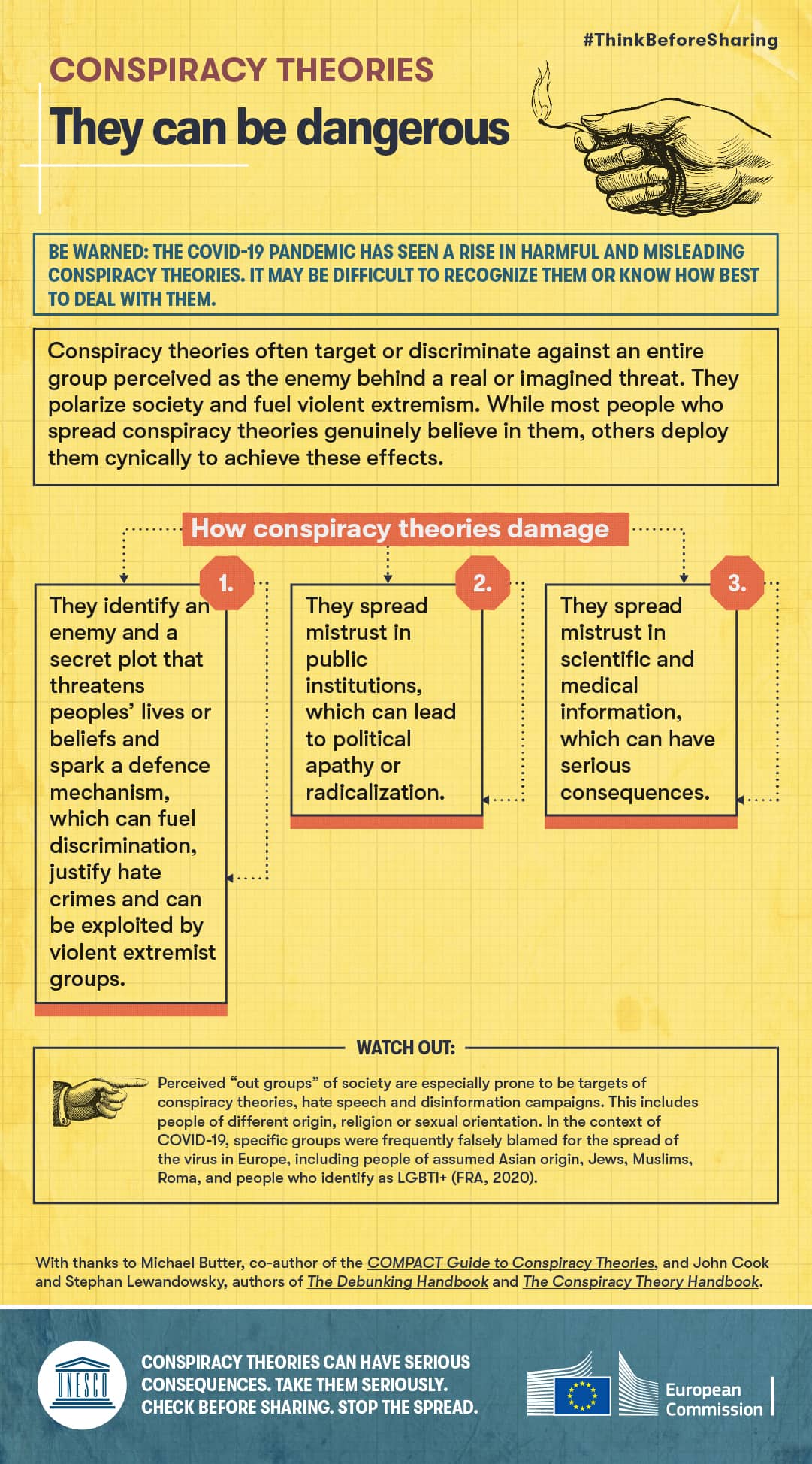 - Alert people about the arguments behind the most common COVID-19 conspiracy theories and the key traits of conspiratorial thinking – suspicion of official accounts, immunity to contrary evidence, reinterpreting random events as part of a broader pattern.

- Choose your target – the author, source or logic behind the conspiracy theory.

- Always state clearly that the information is wrong, before quoting a conspiracy theory.

- If possible, use visual aids to back your argument.

- Don't focus on the conspiracy theory first. Don't reinforce it.

Know how to take action. Stop the spread.

How to talk to somebody who firmly believes in conspiracy theories

Many conspiracy theorists are deeply convinced of their beliefs. Their whole life and worldview are centred around them.

When talking to somebody who firmly believes in a conspiracy theory be aware that:

- They probably believe in more than one conspiracy theory.

- They will probably argue hard to defend their beliefs.

So, what can you do?

- Ask detailed questions about their theory in order to trigger self-reflection.

- Be cautious and use a variety of sources around the theme.

- Show empathy. Often the person may be truly fearful and distressed.

- Go step by step. Focus on simple facts and logic instead of covering every detail.

- Don't push. Too much pressure might backfire. Leave them time to process and try again.

Use empathy and questions. Stop the spread. 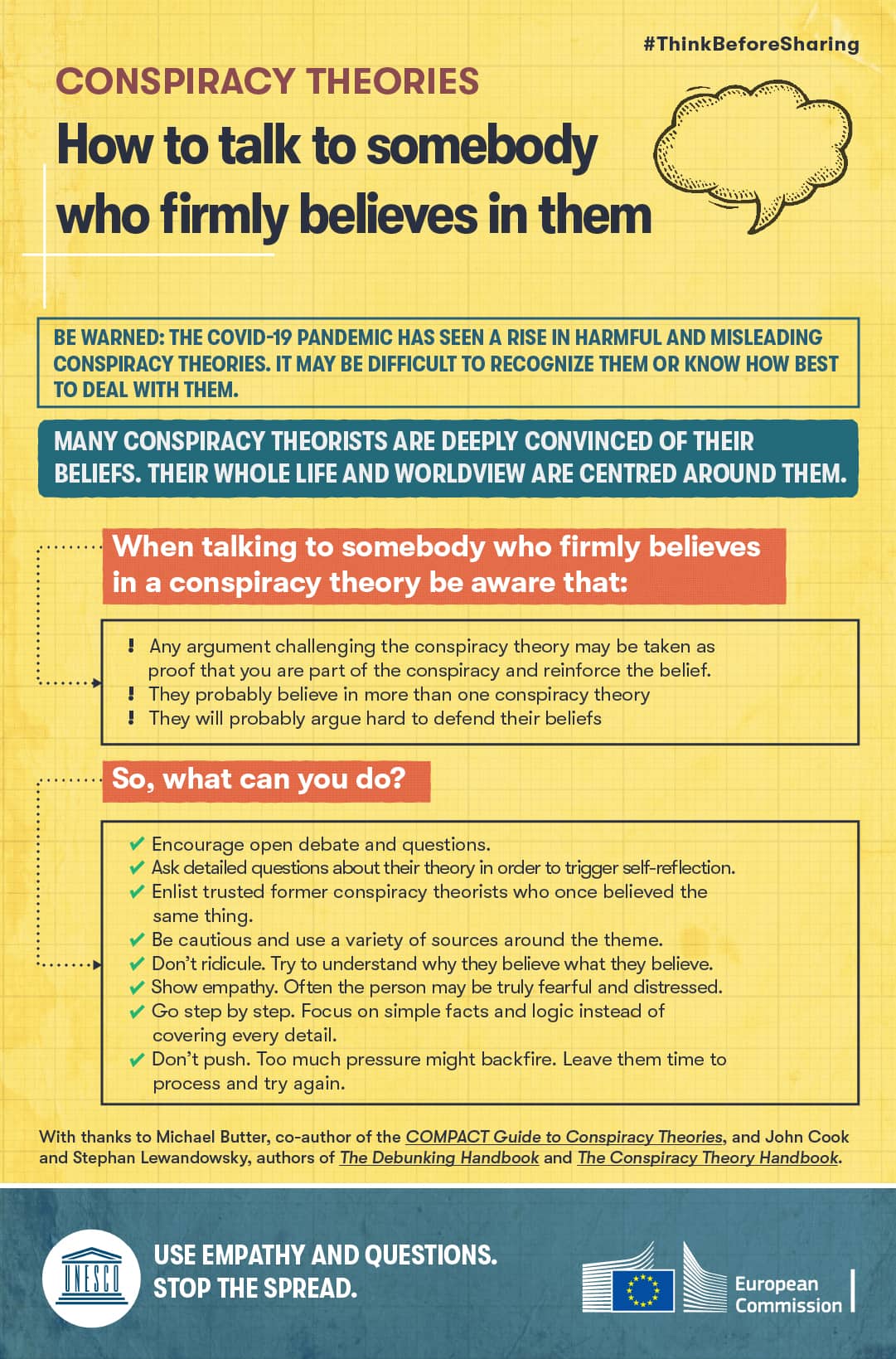